Or at least it’s the last blog in August and your last chance to post a comment to become eligible to win a $20 Wild Rose Press gift certificate and/or a virtual basket filled with e-books from our blog participants.

Lauri lives in Minnesota, in a house that is now empty except for she and her husband. Their youngest of three sons married his best friend this summer, and when he moved out, so did his dog. Lauri misses them both (especially the dog at times.) All three of Lauri’s sons and their families live close by and she and her husband spend every spare moment with their three granddaughters, two step grandsons, and two granddogs. Lauri’s first book was published in 2005 and she now has 15 novels, novellas, and anthology stories on the market.

Lilly-
That's a lot of books in ten years. Can you tell us more about them?

Lilly-
Wow! That’s wonderful. Congratulations. With all those books and all that writing, do you have a non-writing job?

Lauri-
Yes, I work for the local United Way program. I’ve worked in the non-profit field for over twenty years and believe they are an integral part of our society. They provide a balance for causes and situations that are often overlooked.

Lilly-
What do you write?

Lauri-
I’d call it evolution. For years I read romance novels as a stress release. Working in the human services field, I’ve seen a lot of ’, and reading once upon a time and happily ever after was a way to rejuvenate myself before going back to work on Monday. I also believe this is why I enjoy western historicals. My first book was a contemporary, and when I started the second one, I found myself writing about issues and conflicts I see families dealing with in the day job. I put that story aside and since I’ve always loved the old west, decided to write an historical one. There I found myself fully imbedded in once upon a time. Every time I start a new story, I’m filled with excitement to meet the characters and watch their tale evolve into happily every after.

Lilly-
I know what you mean. I love happily ever after endings.  I guess that’s why I write romance novels. So, how do you get ideas for your stories? Do they just come to you? Or does something in your personal life trigger ideas for your story?

Lauri-
Ideas come from many sources. I saw an advertisement about quantum jumping and wrote Wish Craft. My husband and I were on a riverboat in Memphis when I learned about the 1865 Riverboat The Sultana. I came home to write An April to Remember. My dad told me I should write a book about Minnesota, so I wrote A Wife for Big John. The Quinter Bride Series came about after a family reunion and I was thinking about how different each of my sisters-in-law is and how perfect they are for each of my brothers. Kendra’s Choice came about while researching for another book and I stumbled across an article that had supposedly been written back in the 1800’s about what new brides should expect. That’s probably enough examples…I could go on and on. Each book has a unique beginning.

Lilly-
Don’t you just love it when research on one book leads you to ideas for another one? I got the idea for one of my unpublished historicals while doing research on the London sewer system. And the idea for another came about while looking through an old Montgomery Ward’s catalogue. I’m editing those stories now. What are you working on?

Lauri-
I have several stories in the making. A series about three , as well as one about a mail order bride. I also want to continue to build my profile it Harlequin, Mills and Boon’s UNDONE line, so I have a couple of those I’m playing around with.

Lilly-
Do you work on more than one story at a time?

Yes, I have to work on more than one at a time. When a story slows down, or I need to contemplate what’s happening, I find working on another one gives me the opportunity to go back and look at the first one with fresh eyes and ideas.

Lilly-
I do that too, but sometimes it’s easy for me to get caught up in edits and rewrites and forget to put new words to paper. I’m working on finishing every manuscript I start, but it seems I’m always going back to older manuscripts to edit them for this editor or that in the hopes of getting published with multiple publishers. So far, Out of the Darkness is my only published novel. It’s available from The Wild Rose Press, Amazon, and Digibooks. Tell us about your latest release and how we can buy it.

Lauri-
My latest release is actually a re-release in a different format. The e-book version of Kendra’s Choice was released last fall by The Wild Rose Press, but in June the audio version was released by Audio Lark. http://www.audiolark.com/books/kendras-choice/ 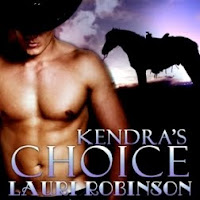 Lilly-
Whoa! That's one hot cowboy on the cover. So, tell me about the book.

Lauri-
Here’s a blurb and excerpt from Kendra’s Choice~

Blurb: Kendra Parker needs a man—it’s research for Widow Swanson’s article, “What Every Woman Needs to Know about Her Marriage Bed.” But the sparse population of Eastern Colorado in 1883 doesn’t offer many choices, until Major Marlow arrives.

Sterling Marlow rode into the Parker farm in time to celebrate the wedding of one of Kincaid Parker’s daughters. But it was the Pastor’s older daughter, Kendra, who caught his attention. Her seductive body wanted him, and who was he to deny the needs of a young woman?

Kendra Parker lowered her hand from her hair and held it out to him.

It took every ounce of control not to grab her hand, pull her against his chest, and kiss the hell out of her. He'd never met a more beautiful woman, nor had one made love to him with her eyes before. Damn! He was wound tighter than a diamond back. Exhaling low and slow, he reached for her hand.

"Miss Parker," he greeted, wincing at how his tone was a good three notes higher than normal.

"Major." Her voice was as lovely as the rest of her—soft, sweet, and more provocative than any saloon girl could ever hope to mimic.

She didn't try to pull her hand away, just let her supple, smooth palm rest against his. Their matching heat mingled, danced. Those blue eyes, still locked onto his, smoldered with enough heat to spark a fire all the way down in Texas. His toes curled inside his boots.

Kincaid's voice broke through the buzzing in his ears. "Kendra, your mother needs your help."

The fingers wrapped around his hand tightened for a split second, and the long lashes over her eyes lowered. Her lips pursed as she let out a long breath before she said, "Yes, Papa."

Sterling told his hand to let go, but it was another second or two before his fingers listened and lessened the hold he had on her. Slowly, sensuously, her fingers slipped away. A trail of heat bolted up his arm hotter than venom from a snake bite.

Lilly-
Well now, that's pretty hot stuff. I think I need a drink. lol! So, now that you've shared this smoking excerpt, how can we get a copy of  Kendra's Choice?

Lauri-
All of my books are listed on my blog www.laurirobinson.blogspot.com along with links to where they can be found.

Lilly-
You can find Lauri's books at:
http://www.fictionwise.com/ebooks/a27142/Lauri-Robinson/?

Lauri-
Thanks, Lilly for inviting me to blog with you today, I’ve really enjoyed it.

Lilly-
Thanks for stopping by and spending time with me.