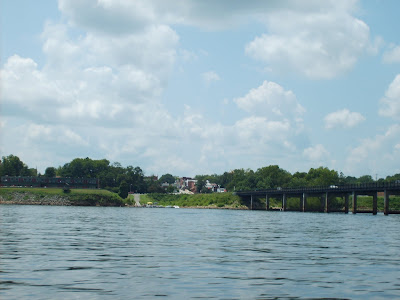 Since part of Out of the Darkness is set in Clarksville, Virginia, I thought I'd post this picture of the quaint little town taken from Kerr Lake...or as some folks in Clarksville call it: Bugg's Island Lake. Check out the town's website at www.clarksvilleva.com
Posted by Lilly Gayle at 12:17 AM No comments: Links to this post

I can hardly wait!
Posted by Lilly Gayle at 10:40 PM No comments: Links to this post

Received my book galley tonight. And I have 10 days to read it and make changes! The pressure is on. And I love it!

I can't make the changes on the actual PDF file. I have to send line edit changes in a separate document with a list of the changes I want to make, line by line, page by page, to my editor, who will forward it to a final reader. This, I'm assuming is the final stage before publication.

And it still doesn't feel real!
Posted by Lilly Gayle at 8:19 PM No comments: Links to this post 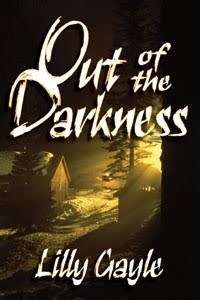 Life is sweet! I have a book cover and I absolutely love it! Please check it out and let me know what you think. Personally, I think Angela Anderson, the artist at The Wild Rose Press did an awesome job!
Posted by Lilly Gayle at 2:19 AM No comments: Links to this post

I'm learning new terminology. A mock galley is an edited copy of my manuscript printed out in the book font and format, using the same page size and margins so it looks pretty much the way the book is going to look once it's printed. That's where I am now in the editing process. I'm going over the "mock galley," checking the manuscript for errors, one last time and making sure that it reads the way I want it to.

This is my last chance to make changes and after the number of times I've read through this, one would think I couldn't possibly find anything else to change. Wrong! I'm still finding minor changes I want to make. Mostly, it's places where I want to delve deeper into the character's POV. I think getting inside the characters head strengthens the story and adds depth to the characters.

Guess I'll just have to wait and see.
Posted by Lilly Gayle at 7:57 PM No comments: Links to this post

Excerpt from Out of the Darkness

Megan took another step back and bumped into the recliner again. She sat on the arm and looked up. “But if Steve’s still pursuing the protein therapy research, why won’t you work with him? He has resources I could never match, and he can get you into clinical trials I can’t.”

“I won’t work with Steve Weldon. Not now. Not ever.” He pulled her to her feet. His eyes were dark. Intense. “I want to work with you--that is if Timmons didn’t take everything. He didn’t, did he?”

He still held onto her hands, and she didn’t have the strength or the desire to pull free. His cool, smooth skin pressed against her palms, warming her from the inside out.

“Just about,” she said, and there was an unintentional invitation in her voice.

There was strength in Vincent’s grip but no calluses on his palms. He might work out, but he didn’t work with his hands.

Damn, if she hadn’t always been attracted to the witty, cerebral types. But she did not want to be attracted to Vincent. He had XP and came with more baggage than a 747. And she had enough emotional baggage of her own.

She cleared her throat. “The files you saw on the dining room table the other night were in a back storage room,” she said, thankful her voice sounded normal. No lingering traces of seductive huskiness. No unconscious invitations. “I had boxes stacked in front of the door so the colonel didn’t know the door was there. But it’ll take months to transfer the raw data into another computer, and that’s all there is. Raw data. Hand-written notes, unofficial reports, and previously published articles and files from the internet.”

He released a tired sigh and her hands. Megan’s heart gave a little lurch she tried to ignore. Despite the risk of heartbreak, she was drawn to Vincent--his intelligence, his tenacity and wit, but most of all, to his loneliness. She could see it when she met his eyes—-feel it in her own heart.

Vincent looked away, as though he’d seen something in her eyes that scared him as well.

“At least we have something to work with,” he said tiredly. “Why don’t you show me what you have and then make me a list of what you need? I can’t replace the actual research, but I can get you a new computer and whatever else you might need from Lifeblood’s labs.” Then he headed down the hall toward the basement as though it was a done deal.

Megan rushed to catch up.

“I’m glad you prefer working with me over Steve,” she said, “but I don’t like being manipulated. You should have told me he was still interested in XP research.”

“He’s not. That’s why I came to you.” Vincent didn’t spare her a second glance as he opened the basement door and stepped down. The sound of his boot heels striking wood echoed up the steps as he disappeared into the darkness.

“But--” Megan switched on the light and hurried after him.

“The first thing you need down here is a table and some chairs,” he said when he saw the stacks of unorganized data and reams of paper scattered across the floor.

“I have a desk.” She pointed to where her monitor and keyboard still sat. The hard drive was gone. Loose cables dangled to the floor.

“We need room to spread out. Do you mind if I bring the table and chairs down from the kitchen?”

“No.” She turned back toward the stairs. “I’ll help you bring them down.” It would give her something to do while she sorted through the confused thoughts and emotions tumbling around inside her head.

Vincent touched her arm and heat shot straight to her belly, turning her insides all warm and fuzzy.

Warm and fuzzy was not good.

“I’ll get it.” He let go of her arm and stepped back. “You start going through those papers and find that report you wrote comparing XP to vampire myths and legends. I’d be interested in seeing it if you still have it.”

He turned to go back up the stairs and Megan shivered. Why had Steve mentioned the vampire report to Vincent? And why was Vincent so interested in seeing it?

Posted by Lilly Gayle at 8:50 PM 2 comments: Links to this post