Life is Not a Planned Event

But the only thing I got right in my planning was having my tubes tied at thirty-five.

Sometimes in life we get what we need and not what we want. 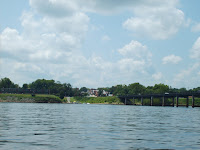 a lakeside town less than twenty miles from where I grew up in Grassy Creek, North Carolina. Clarksville is also the hometown of Dr. Megan Harper,the heroine in my vampire romance, OUT OF THE DARKNESS, which will be released from The Wild Rose Press in May of this year.

My husband is from South Boston, Virginia, which is about twenty or so miles on the other side of Clarksville. The night we met, he followed my sisters and me home from the bar so he could see where I lived. (I’d kill my daughters if they did anything so stupid!) But Johnny followed us home and came inside to meet my mother who is also from South Boston. I knew from the moment I met Johnny that he was someone special. And that night, he asked me out for the following night.

Since it was dark when he followed me home, he asked if I could meet him in Clarksville the next night because he was afraid he couldn’t find my house again, which was way out in the boondocks. My dad agreed to take me to a convenience store in Clarksville and let him pick me up there. But when the time came and went and he didn’t show up, I was devastated. I just knew I’d been stood up by some low-life I’d met in a bar.

How could I have been so stupid? How could I let those silver blue eyes fool me?

I couldn’t look at my dad. But then, this beat up old truck pulled into the convenience store parking lot and out jumped Johnny, full of apologies. His car had broken down on the side of the road—this was before cell phones—and he had to hitchhike the rest of the way to Clarksville. I was so relieved!

He and my dad shook hands and my dad agreed to take a look at his car. So, we piled into my dad’s car and drove back up the road to where Johnny’s car had broken down.

My dad knows a lot about cars and was able to repair the busted radiator hose but the radiator needed water. Luckily, there was a creek down an embankment and a plastic milk jug in the ditch. So, I volunteered to climb down to the creek and fill the jug with water…

And I fell in…

And got wet and muddy.

But the car got fixed and I went on my first date with Johnny. And he took me to meet his folks so he could borrow his dad’s car to take me home after the date. So, I met his parents with a wet left shoe and muddy pants. But one month later, Johnny and I were going steady. And nine months later we were engaged. And nine months after that, we were married. And this June, we will celebrate our thirtieth wedding anniversary.

Thirty years has gone by fast. Like any couple, we’ve had our ups and downs, but I’ve learned a lot about love and romance. You have to do things as a family, but a couple needs date night. A couple also needs space. I have my computer and writing. My husband has his garage. But doing things together is what keeps us together. And we enjoy spending time at the beach. We fish, or ride bikes or just sit and watch the waves. As we've gotten older, we’ve found common interests but we don’t try to change the interests we don’t share.

Life is about compromise. And sharing. In equal measure.

I still like to plan but I’ve learned that plans are not only NOT written in stone, they are very likely written in the sand at high tide. 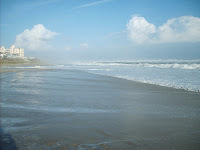 Everything changes….
Posted by Lilly Gayle at 8:23 PM