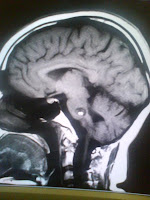 My cabinets and closets are cluttered. My office is a mess, though I try to organize. Then I find myself unable to throw anything away for fear I might need it later. I’m not a hoarder, but I have stacks of research folders in stacking trays, and I’m not even sure what the folders contain because I have no system for identifying the information. I just write on the folders with a Sharpie and chunk it in the tray.

I also have stacks of note cards stuffed in drawers and ideas scribbled on Post-it-Notes. If an idea comes to me, I write it down so I won’t forget it, but I don’t stop what I’m doing or take the time to organize the information.

I’m impetuous and imaginative, which is a good thing for a writer, but it leaves my office a mess. And sometimes, it’s weeks before I get around to cleaning up the clutter left behind from a week of inspired writing—or a week of goofing off on the computer while ideas percolate in my brain. But I guess that’s the right side of my brain at work, the part responsible for creativity and imagination. It’s also the part of the brain that apparently hinders me from being overly organized and allows me to make excuses and blame neuropsychology for the mess in my office.

That creative side of me has always been disorganized, but I’m trying to improve. Before I joined my local chapter of RWA, I wrote by the seat of my pants and spent more time revising than I did writing. Now, I plot out my stories first before sitting down at the computer. I even purchased a writing program, called Write It Now that allows me to write an outline, character descriptions, an overview of each chapter before I begin writing. That way, I can see potential flaws in logic and areas of weak motivation and conflict before I get to the notorious sagging middle.

I’m hoping the new software will help as I write the sequel to OUT OF THE DARKNESS. So far, it’s shown me my original idea for the sequel isn’t going to work. Last week, I trashed the six chapters I’d written and am pretty much starting over. I have a great blurb written and I’m working on the outline before putting fingers to keyboard.

Trashing six chapters was tough, but getting to the middle of a book and realizing you have no where to go is even tougher. Had I still been writing by the seat of my pants, I would have struggled through until the end, making changes as I went and forcing things to fit, and then revising when I reached the end. And the revisions would have been extensive.

So my best advice on organization is to organize first before starting to write. As for office clutter, maybe it’s just a sign of a right-brain dominant person with a highly evolved imagination hard at work on something creative.

And what about self-promotion? Well, I suck at it. Until OUT OF THE DARKNESS

is released May 28, 2010 and I figure something else out, this is it. Blogging. And my shameless promotion of my webpage, which I will beg you to check out now.
www.lillygayle.com
Posted by Lilly Gayle at 6:02 AM