So, why do things like mismatched towels, dirty floors, clutter, and unwashed dishes bother me, and yet, if you look under my bed or sofa, you'll find mutant killer dust bunnies that have been there for who know how long? And let's not discuss my closets and cabinets!

Closets, cabinets, and dust bunnies not withstanding, I don't claim to be a great housekeeper. I sometimes leave the supper dishes over night, hoping someone else will do them. But it bothers me. And if they're still unwashed the next morning or when I get home from work, I wash them. But I hate external clutter and mess. It's just the internal stuff that doesn't seem to bother me. It's like, if I can't see it, it doesn't exist.

Freud would have a field day with that one, wouldn't he!

So, how do I find time to work ten hours a day, four days a week at my regular job as a mammographer, try to keep a house clean, spend time with my family, and write?
It's hard, but it's gotten easier now that my girls are grown. When they were little, I felt as if I were depriving them of "mommy time" whenever I was at the computer.

But life has always been a balancing act for me because I've always worked full time and never had the luxury of being a stay at home mom. And once I decided I wanted to write, that was just one more thing dividing my time. Luckily, my husband has always been supportive and understanding. He bought my first computer.

I started out writing children's stories in 1995. In 1997, I wrote my first full length manuscript, a medical thriller with romantic elements. It read like a radiology text book with sex in the middle. It was so horrible I destroyed every copy and not one single version exists today.

I've since completed several manuscripts. Some show great promise. Others do not. OUT OF THE DARKNESS is my first and thus far, only published novel. It will be released on June 18 from The Wild Rose Press.

During the week, I get up at five o'clock. I shower and dress by six so I can spend about thirty minutes on the computer before leaving for work at six thirty...that is if Facebook doesn't suck me in and my husband doesn't decide he wants to talk that morning.

My husband is a route salesman with unpredictable hours so if I get home before him, I spend another thirty minutes to an hour on the computer before he gets home. My oldest daughter is married and living in Germany. My youngest daughter is in the x-ray program at the local college so she still lives at home. But she divides her time between work, school, and her boyfriend.

She and the boyfriend eat at home on Tuesdays and Thursdays so that's family night. But Monday and Wednesday are my days. I write and do laundry after work. And I'm off on Friday so that's house cleaning and writing day. Saturday and Sunday are up for grabs, but I try to spend a few hours each day at the computer, and if we go to the beach, I always take my laptop! 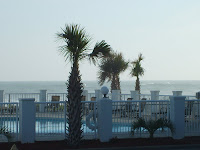 Now, with Christmas fast approaching, I'm having a hard time writing. Well, maybe it's not so much the holidays but these long winter nights. I hate the shorter, colder days, and I look forward to December 21. After the winter solstice, I know the days will get longer and then, spring will soon be here.

I do love the warmer weather! But I'm getting ahead of myself. I must get through the holidays, and this year, my oldest daughter and her husband will not be coming home for Christmas so I have to mail all their packages to Germany.

They were home last year, and we took a lovely family photo.

I still have so much to do and so little time, but my tree is up, most all of the presents are bought and wrapped, and I'm getting in the holiday spirit! Now, if I can only keep my but in the chair and write!

I suppose, getting published has made it easier for me to write. I guess it's like being in school and having a home work assignment. I seem to work more consistently with a deadline! If I know what I have to do and when it's due, I push myself and get it done.

So, why can't I just pretend I have a deadline and finish the sequel to OUT OF THE DARKNESS?

Good question. And I have a lot of excuses!

One excuse is my former agent. She suggested I rewrite two historical novels and make them inspirational. I did. Then she suggested I write an Amish story. I don't do Amish. Now, I'm rewriting the historicals back into traditional romances.

Lesson learned: Write what you read and remain true to your voice.

I guess I should have known from having published with TWRP. My fabulous editor, Lill, never tried to change my voice or OUT OF THE DARKNESS. She just helped make it a better story.

That's what an agent is supposed to do. If he/she truly loves your work, he/she will try to sell it as is with minor tweaks where needed. If an agent doesn't love your story, then you need to find an agent who does.

And if you find a good critique partner, keep them. I have one, though I think I neglect her. But, with Amy Corwin's help, I think I've figured out why I haven't been able to finish INTO THE LIGHT, the sequel to OUT OF THE DARKNESS.

Not that I've shared my revelations with Amy, but I think I know why I have too much backstory dumping in the first three chapters.

I'm writing a new story, but I'm trying to pick up where OUT OF THE DARKNESS ended. For INTO THE LIGHT to make sense, there's a certain amount of information the reader needs almost from the beginning. Instant backstory dump!

But as Amy pointed out, INTO THE LIGHT must stand alone. So, how do I balance a new story with information from a previous book?

Other writers have done it successfully. I know the secret is to feed the information in gradually and not force the information into the first chapter. But do I really want my sequel to be a continuation of the same story? Or do I want something fresh. A new twist in the old story? Can I have a fresh story if my characters have too much history? Do Tina and Gerard know too much about one another? Or are they just getting acquainted?

I know I want a new romance. Not a continuation of OUT OF THE DARKNESS. And since I want to start fresh and not pick up where I left off, then something has to change.

So, how am I going to do that? Do I change my characters? My plot? Or just the starting point of my story?


I will be signing copies of Out of the Darkness on Dec. 11, 2010 from 12:00 to 3:00 at Ababagayle's Books in Henderson NC. Check out Abagayle's website @ www.abagaylesbooks.com